The History of the Humble Fish and Chip Shop

How many fish and chip shops are there in the UK?

When considering cuisine in the UK, there is nothing more quintessentially British than fish and chips. According to The National Federation of Fish Friers, it is estimated there are 10,500 specialist fish and chip shops in the UK, selling 382 million meals every year. This amounts to a staggering £1.2 billion.

Many would say that fish and chips are the national dish of Great Britain, and it is this iconic staple dish that the UK is famous for around the world. It is a simple dish, which is traditionally bought from the local chip shop or ‘chippie’. Although today, it is a regular feature on restaurant menus across the world. In its most authentic version, white fish is coated in flour and deep-fried in oil to create the crispy exterior known as batter and is accompanied by chips, which are also fried. The meal is then topped generously with salt and vinegar, and quite often, a portion of mushy peas goes with it. 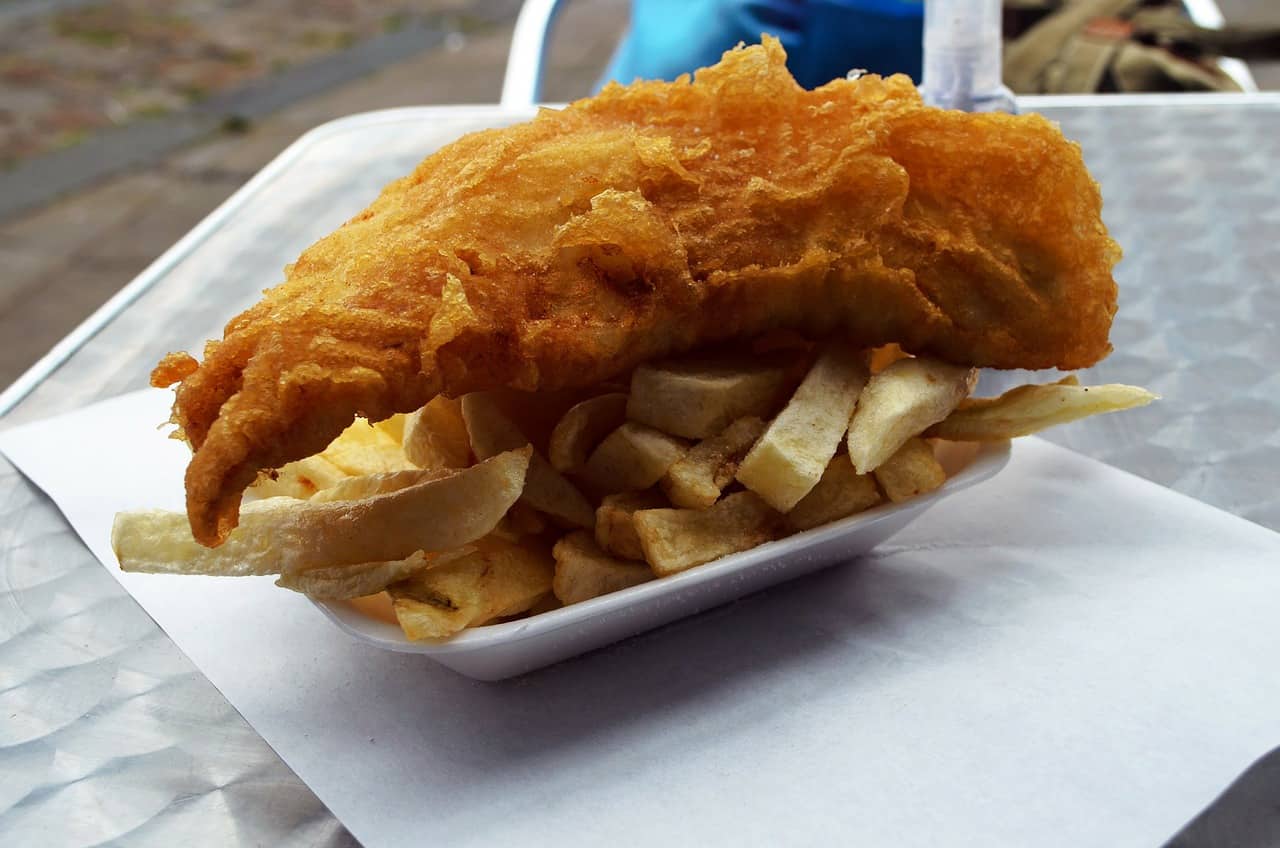 Where did the idea of fish and chips come from?

It is thought that fish cooked in this way may have originated from Western Sephardic Jewish immigrants from Holland, who came from Portugal and Spain and settled in the British Isles in the 16th century. They named the fish, ‘pescado frito’ and it was prepared for Shabbat (Sabbath) on Friday evenings. Early references include ‘fried fish warehouses’ in Charles Dickens’ novel Oliver Twist and Alexis Soyer’s book, A Shilling Cookery for the People, which includes a recipe for ‘Fried fish Jewish fashion’.

Who opened the first fish and chip shop?

There is some dispute as to who opened the first fish and chip shop in the UK. Some suggest it was John Lees, a northern businessman who it is claimed was selling the combination out of a wooden hut at Mossley market, near Oldham in Lancashire around 1863. This business was later transferred to a more permanent location across the road with Mr Lees putting an inscription in the window, “This is the first fish and chip shop in the world.” However, in 1860 Joseph Malin reportedly opened a shop in London’s Cleveland Street. He came from a family of rug weavers, and in order to supplement their income, they opened the shop selling fried potatoes with Joseph convincing them to add fried fish, which became an overnight success.

Fish and chip supplies safeguarded during World War I and II

From 1870 to the 1900s, it appears that fish and chips were often sold from the front rooms of houses and were run as small family businesses. Today, ‘The Oldest Fish & Chip Shop in The World’ is still going strong in Yeadon near Leeds, where the national dish has been served since 1865. It is interesting to note that during both World War I and World War II, safeguarding the supplies of fish and chips was regarded as a priority and not subjected to rationing.

Why is Friday fish and chip day?

The origin as to why Friday is fish and chip day can be related to religious reasons. Many Christians, and particularly Catholics, did not eat meat on a Friday because it was the day that Jesus was crucified and sacrificed himself for mankind. Fish are cold-blooded and not considered as meat. For centuries Christians have abstained from eating meat on Good Friday and this has carried over to not eating meat on any Friday of the year. The tradition is still very strong today with many schools serving fish on a Friday and many British people seeing it as the day to have a fish and chip supper.

Facts about fish and chips

The modern fish and chip shop

Up until the 1980s fish and chips were served in newspaper, which kept prices low. This was the case until it was realised that the ink from the newspaper was harmful to health and today they are wrapped in greaseproof paper, as it is more hygienic.

Although the number of fish and chip shops has fallen since the heyday of the 1920s, there does seem to be a renaissance today with some introducing a more contemporary and foodie feel to the chippie. John Molnar founded ‘The Cod’s Scallops’, which offers 17 different varieties of fish on its menu at any given time including hake, grey mullet, lemon sole and scallops. Today there are many competitions and awards for the best ‘fish and chip shop’ which is a testament to the fish and chip shop’s place in popular culture and in 2020 The Cod’s Scallops netted the honour of being Fish and Chip Shop of the Year. 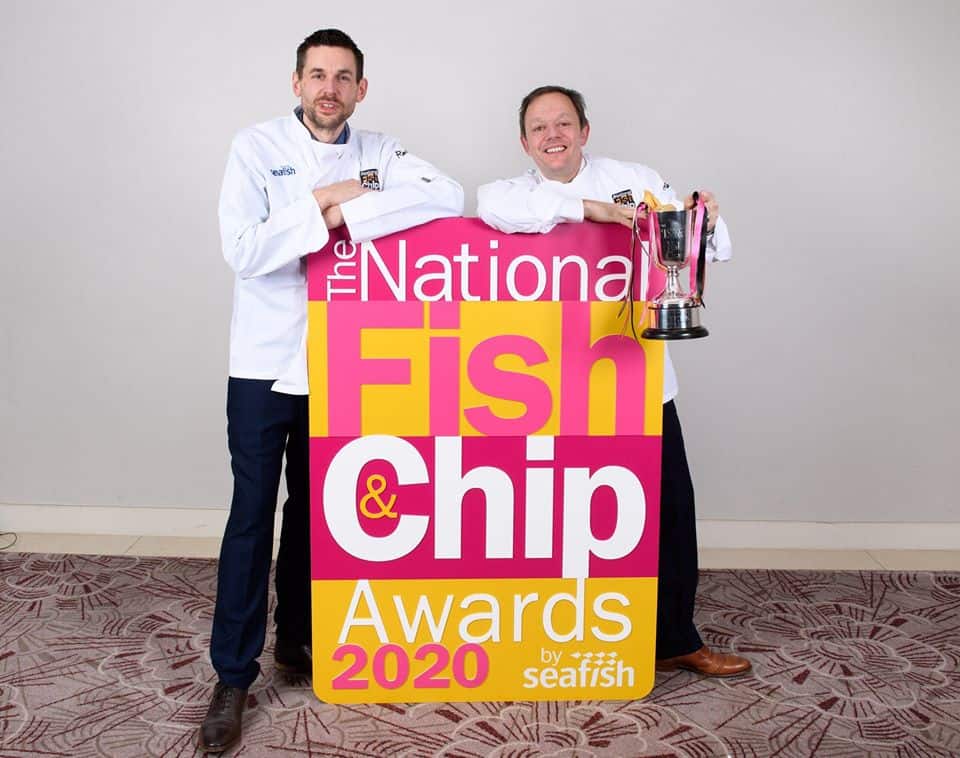 In many respects, the iconic fish and chip shop has not changed a lot, but the industry has become more sophisticated with recognition of the broader issues of the seafood supply chain. Sustainability is playing a significantly more important role. As consumers continually want to know where their food has come from, many fish and chip shop owners are now telling their customers where the fish has been sourced.

Do you own a fish and chip shop?

If you do, as you have just read you are one of 10,500 fish and chip shops, serving the nations favourite dish.

With any catering business, there are potential risks when it comes to working with food, cooking utensils, hot oil and other cooking devices. This can lead to serious injury to you and your staff, ranging from burns and cuts to slips, trips and falls.

Some fish and chip shops often have unsociable trading hours serving the general public late nights and on the weekends. Antisocial behaviour and violent crimes can often occur during this time, causing damage to your premises and intimidating behaviour towards you, your staff and other customers waiting for food.

All of this could lead to legal and financial implications, resulting in disruption or loss of trade. It is important that your business has the right cover to protect you in these worst-case scenarios.

The Retail Mutual was set up to provide the right cover for businesses that occupy the high streets up and down the country. Unlike insurance providers, we are operated by our members for our members to ensure you have the right protection for your business.

In addition to business cover for your fish and chip shop, The Retail Mutual offers access to additional products and services from home cover to cover for any landlord properties you may own.

To find out more about how The Retail Mutual can help to protect your fish and chip shop or for a free, no-obligation quote, call 0333 2121 280 today or start your quote online.