Everything You Need to Know About the New £20 Note

What should retailers know about the new £20 note?

The new £20 note came into effect on 20th February 2020. It is said to be ‘the most secure ever’ banknote, which is good news for retailers and the general public as the £20 note is the most common note in circulation. 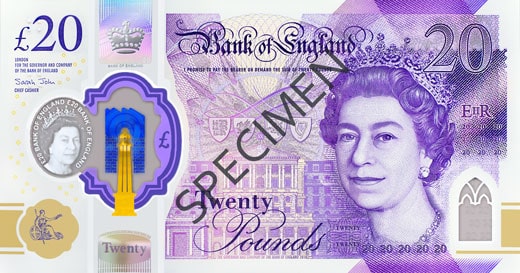 Image source: The Bank of England

What are the features of a polymer banknote?

In a nutshell, notes made from polymer are more durable, hygienic and secure.

What are the security features of the new £20 note?

The new £20 note has the following security features, making it more difficult to forge.

How do I check whether the new £20 note is counterfeit?

When does the old paper £20 note go out of circulation?

As with other notes and coins that have gone out of circulation, many banks will still accept them from their customers. The Post Office may accept the old paper £20 note as a deposit into any bank account accessible at the Post Office. Withdrawn notes can always be exchanged with the Bank of England.

Banknotes don’t just hold economic value; there is a cultural value as well

Banknotes have been in existence for 300+ years and during that time the way that the notes have been printed has changed a lot. Since the mid-1980s, there have been four denominations in circulation, £5, £10, £20 and £50. It is vital that banknotes are of high quality, long lasting and difficult to forge and the latest development of printing notes on polymer fulfils all of these 3 requisites.

The governor of the Bank of England, Mark Carney, alluded to the fact that banknotes are much more than a practical necessity: “They can be a piece of art in everyone’s pocket. Banknotes are a celebration of the UK’s heritage, a salute to its culture, a testament to its great achievements, including those of its notable citizens.”

As with all British banknotes, there is an image on the back of the note and this time it is JMW Turner. This was actually announced on 22nd April 2016 with the great British painter to replace the old face of the paper £20 note, Adam Smith, the economist. Turner will become the first artist to appear on a British banknote following a nationwide vote.

Who is JMW Turner?

Joseph Mallord William Turner (1775 – 1851) was famous for his landscape and seascape paintings and is often referred to as being ahead of his time and the first modern artist, because of his messy and expressive style and use of bright colours, the latter making him known as ‘the painter of light’.

The note features a self-portrait of the artist JMW Turner painted c1799 and which can be seen at Tate Britain where much of Turner’s work is on display. The backdrop is The Fighting Temeraire, one of Turner’s most famous paintings, a tribute to HMS Temeraire, which was prominent in Nelson’s victory at The Battle of Trafalgar. There is also an image of the Turner Contemporary gallery and of Margate Lighthouse. It also has a quote, “Light is therefore colour”, a reference to Turner’s innovative use of light, shade, tone and colour with his signature taken from his will. Are there any plans to change the £50 note?

The mathematician Alan Turing is the face of the new polymer £50 note which entered general circulation on 23 June 2021. The last day the old paper £50 note can be used is on 30 September 2022.